The suburbs of Darlinghurst, Woolloomooloo and Kings Cross in Sydney in the late 1920s and early 1930s was a world in turmoil with vicious ‘razor’ gangs battling for control of the criminal underworld. They were called razor gangs because of the cut throat razor (a straight shaving blade) that was the weapon of choice, especially after the Pistol Licensing Act of 1927 meant automatic gaol time for anyone caught carrying an unlicensed firearm.

The razor gangs at the heart of these wars were led by Tilly Devine and Kate Leigh. The upsurge in organised crime in the late 1920s is usually attributed to several factors:

The razor gangs at the heart of the razor gang wars of 1927-31 were led by two very different women: Tilly Devine and Kate Leigh.

Tilly and Kate’s battle for supremacy led to a running battle in the streets of Sydney that left many people dead, disfigured or doing gaol time. 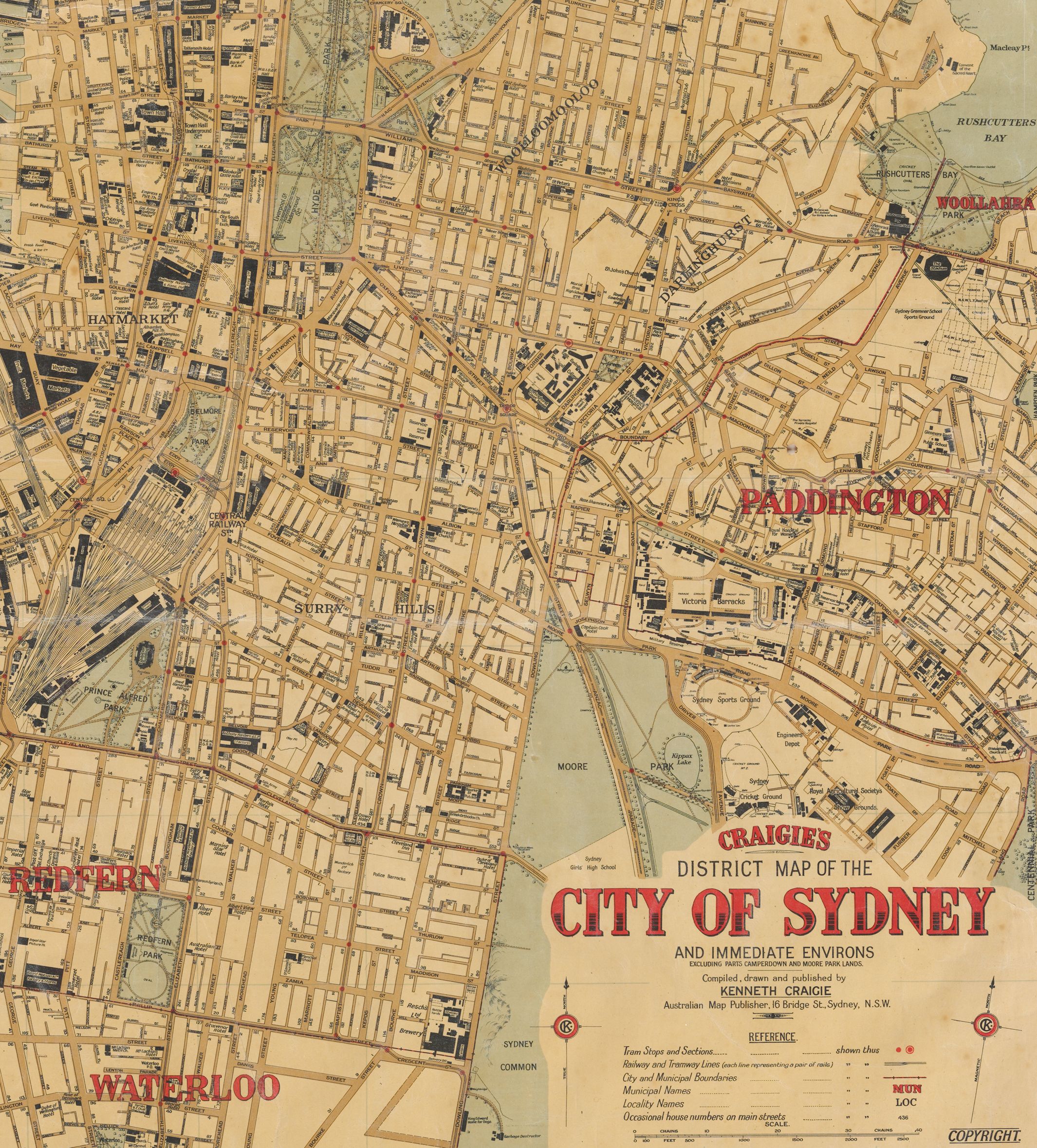 Matilda Twiss was born in Camberwell, London in 1900. She began working as a prostitute after she left school. Tilly was flirty, vivacious, buxom and pretty and she was soon earning good money. She met James Edward Devine in 1916 and it was a case of opposites attracting. Jim, or 'Big Jim' as he was known, was born in Victoria in 1892 and was serving as an Australian Digger in World War I. Jim was known to be sour and sullen and quick to temper. TIlly and Jim married in 1917 and soon had a son.

When Jim was repatriated home at the end of the war, Tilly followed soon after, leaving behind her infant son to be raised by her parents. She arrived in Sydney on 13 January 1920 on the Waimana, a 'war bride' ship . Tilly is listed second from top as Mrs M Devine. She soon began working as a prostitute in Sydney while Big Jim provided her with protection. Tilly and Jim eventually divorced in 1943 after 25 years of marriage. Jim returned to Melbourne and died sometime in the 1960s.

By 1925 Tilly was well-known to police. In five years she had accumulated a long list of convictions; the numerous offences ranged from common prositute to indecent language, offensive behaviour and assault. The police report is a snapshot of the life that Tilly was leading up to 1925, a life that involved working the streets at night, clashes with police and lots of parties and heavy drinking.

Tilly served two years in the State Reformatory at Long Bay for maliciously wounding Sydney Corke with a razor blade. The stint ‘inside’ convinced her to make some important career changes when she was released. She decided to start her own brothels rather than continuing as a street walking prostitute. Tilly was able to pursue a long career as a madam because the law stated that it was only illegal for men to live off the earnings of prostitutes. She quickly set up a number of brothels around Palmer Street when she was released from gaol. Big Jim also started selling cocaine out of the brothels.

Kate Leigh, born 1887, had a personal rivalry and enmity with Tilly that lasted for many years. They headed two of the most powerful razor gangs and were out to protect their own. Kate ran a sly-grog business which provided illegal alcohol after 6pm when the pubs had to shut. Both women were rich, powerful, violent and tried to outdo each other with furs and jewels. While Kate was a tough adversary for Tilly, she had a generous side and loved to be in court to see daily proceedings, sometimes bringing her vegetables to prepare for her evening meal.

Francis Donald Green (Frank Green) was born in Sydney in 1902. He became known as The Little Gunman, reflecting his stature of 1.65m. His gaol record shows that Green had brown hair and eyes, along with an L-shaped scar on his right cheek (a razor scar) and several bullet wounds on his body. Green worked as a gun for hire and Tilly used him to protect her brothels in the late 1920s. Green had an explosive temper, not helped by the fact he was an alcoholic and cocaine addict. Green had a falling out with the Devines after the 1929 shooting of Gregory Gaffney and he faded to obscurity before dying from stab wounds inflicted by his girlfriend in 1956.

Guido Calletti was born in Sydney in 1902. He was in trouble with the law from the age of eight and by the time he was 25 Calletti was the leader of the Darlinghurst Push, a small group of street brawlers and stand-over men. Calletti worked as a pimp, thief and hired thug, interspersed with periods of work as a labourer and co-owner of a fruit barrow. Calletti had an on-going love affair with Nellie Cameron (and rivalry with Frank Green) whom he eventually married in January 1934. Calletti died of gunshot wounds in 1939.

Sid McDonald worked as a bodyguard for hire and was employed by Tilly at the height of the Razor gangs wars. McDonald was born in Queensland in 1898 and had a string of minor charges and gaol time. McDonald took part in the gunfight at Tilly’s home in 1929.

Nellie Cameron was born in 1912 on Sydney’s North Shore. In 1926 she ran away from home and found work as a prostitute. Nellie was well known for her beautiful looks, sex appeal and hour-glass figure. Her relationships with gangsters (and their deaths) Norman Buhn, Frank Green and Guido Calletti, led to her becoming known as ‘the Kiss of Death Girl’. Cameron committed suicide in 1953, aged 41, after outliving her gangster lovers.

On 17 July 1929 Kate Leigh’s gang, led by Gregory Gaffney, ambushed Frank Green and Sid McDonald; the Devines, McDonald and a wounded Green all retreated to the Devine’s Maroubra home waiting for next attack which occured at midnight. Gaffney was shot dead by Big Jim. In Court, Jim stated he 'fired more to frighten' the assailants away than to harm. He was found not guilty of murder at his trial as he was protecting his property.

Tilly filed for divorce from her husband Jim in 1942 after years of physical abuse. Their opposite personalities and hedonistic lifestyle finally took a toll on their relationship. Tilly went on to marry seaman Eric Parsons in 1945. Jim returned to Melbourne and died sometime in the 1960s.

November 1926 Norman Bruhn, a standover man from Melbourne, arrived in Sydney and set up in the Cross. He came into conflict with both Kate, Tilly and Phil ‘the Jew’ Jeffs (ran drugs and gambling in the Cross).

7 May 1929 ‘Battle of Blood Alley’ in the Cross. A 30 minute brawl between Jeffs and a rival gang. Jeffs was shot but recovered.

1928 Escalating street violence throughout the year.

17 July 1929 Frank Green and Sid McDonald ambushed in Woolloomooloo by a group of Kate Leigh’s men led by Gregory Gaffney. Devines and McDonald, along with a wounded Green, retreated to the Devine’s Maroubra home waiting for next attack which occured at midnight. Gaffney shot dead while Tomlinson and Dalton survive. Big Jim found not guilty of murder at trial.

8 August 1929 Battle on Kellett Street occured while Kate was in gaol. Tilly on offensive and attacked Kate’s sly-grog shops in a pitched battle.

5 September 1929 Big Jim and Frank Green shot Tomlinson and Dalton in the street. Dalton died but Tomlinson survived and namedonly Green as his assailant.

January 1930 Tilly arrested as Vagrancy (Amendment) Act 1929 comes into effect. The Act is an attempt to curtail gang violence by giving Police new powers to arrest and goal anyone found to be habitually consorting with thieves, prostitutes or vagrants. Tilly promises judge to leave Sydney for two years.

March 1930 The first of Green’s murder trials started but jury deadlocked. Green is eventually acquitted at a second trial. Green has falling out with Devines and no longer works for them.

Both Tilly and Kate feel the effects of the Depression on their business and also spend more time in gaol due to the Vagrancy Act. Kate declared bankrupt in 1954 and died in 1964. By 1959 Tilly had to sell off her extensive property holdings in order to pay the Tax Office £20,000. She was left with only one brothel and her Maroubra house.

Behind the scenes: How to read a ‘special’

Around the world, police forces followed established conventions when taking mugshots. But Sydney police in the 1920s did things differently.