A sofa Harry Seidler designed for Rose Seidler House was conserved and reupholstered, and the process revealed some unexpected findings

The furniture at Rose Seidler House constitutes arguably one of the most important mid-20th-century domestic design collections in Australia, particularly as it remains in situ, and as arranged by the architect. Most of it is original, either bought from the New York showrooms of Herman Miller and Knoll or designed by Seidler in Australia and made expressly for the house.

Like most other modernist architects of his generation, Harry Seidler believed that an architect had a holistic role in the design and selection of all of the components in a commission, including the interiors and finishes, furniture and furnishings, and even domestic objects and appliances – all of which revealed their fitness for purpose through their form and materiality. The design of his parents’ house offered the young Harry Seidler the first opportunity to demonstrate his skill in this way.

Recently, MHNSW staff, working with furniture conservator Ben Stoner, carried out extensive conservation of the living room sofa, which was designed by Seidler in the late 1940s and made locally by Viennese-born Paul Kafka. Kafka, who was an acquaintance of Seidler’s mother, Rose, emigrated to Australia in 1939 and established a furniture factory in Sydney. He’s understood also to have made the dining table, coffee table, desks and wall cabinets at Rose Seidler House. The sofa appears in numerous photographs of the interiors from the 1950s, providing excellent visual evidence of its original form.

From the early 1980s, Seidler carefully oversaw work on the house, its furniture, furnishings and their arrangement, before generously gifting the property to the state to be managed by the Historic Houses Trust of NSW (now MHNSW). The furniture and furnishings in Rose Seidler House are now arranged as Seidler originally designed them in 1950, and as used by his parents from 1950 to 1967.

One of the conditions of the gift is that the house be kept in ‘its present display‑furnished state with all furniture kept in a condition suitable for such display’.1 To this end, the presentation of the house and its contents as a ‘selective reconstruction’2 is a careful reflection of the place as envisaged by the architect, and this is taken into consideration before commissioning any work on objects from the collection. It accounts for the different approach to conservation MHNSW applies here in comparison with some other properties.

We take a multifaceted approach to the conservation of our house museums and their collections. When conserving an object in its original setting, we aim to develop a thorough understanding not only of the object and its history, but also the context in which it’s being interpreted and presented. At one end of the spectrum sits Rouse Hill Estate, with its substantial intact collection spanning five generations of the Rouse and Terry families, and where our approach to object conservation is to do ‘as much as necessary and as little as possible’. Conversely, as a selective reconstruction, Rose Seidler House sits at the other end of the spectrum.

A routine assessment of the collection in 2018 identified that the upholstery fabric on the four-seater sofa in the living room was deteriorating and the castors were unstable. Removing the fabric would also allow us to assess the integrity of the upholstery materials and the sofa carcass (or framework). Early photographs of the sofa show a sleeker, more angular back and arms, and the seat appears to have raked back further – was it ‘sitting’ on the floor as it originally did? 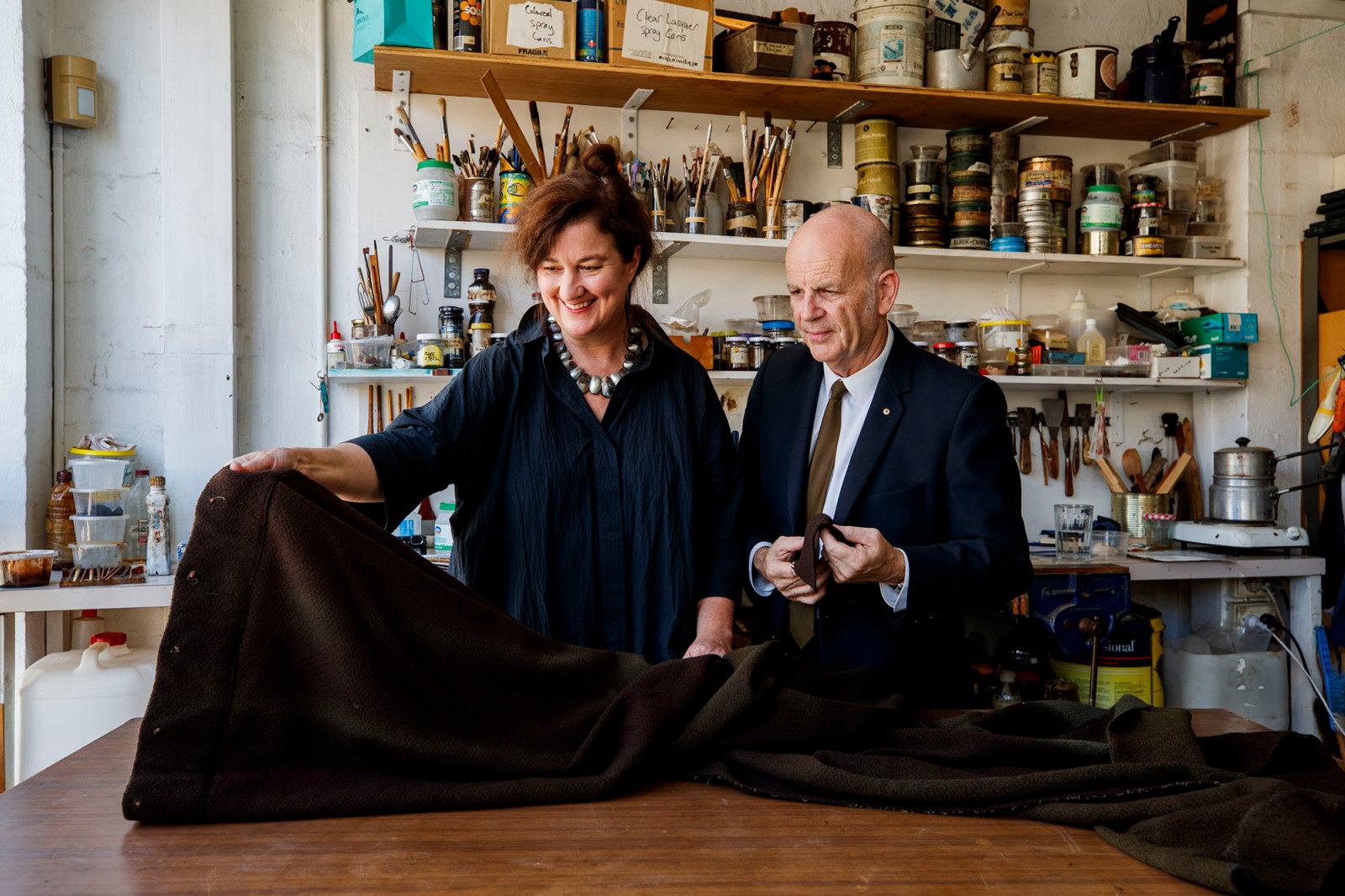 The hunt for brown bouclé

We knew that the sofa’s upholstery fabric, like most of the other soft furnishings in the house, wasn’t original. A review and analysis of documentary sources, including oral histories recorded with Seidler, suggested that the sofa had already been reupholstered, or at least re-covered, a number of times.

As textiles at Rose Seidler House – such as bedcovers, curtains and even the carpet – wear out and require replacement, we reproduce them using original samples or other documentary sources as reference. It’s much easier to source an accurate reproduction of a historical fabric if you have a sample; on this occasion, as far as we were aware, none had survived. However, we did know that the sofa, the curtain in the playroom, and a pair of grasshopper chairs designed by the Finnish-American architect Eero Saarinen were covered with the same dark brown fabric. We also knew that in September 1952 Keith Newman, editor of Home Beautiful, noted that the fabric was a ‘heavy boucle coating which has a velvety suede-like appearance’.3

Another clue came from a reference in the Rose Seidler House Conservation Plan to furnishings in the house Seidler designed for his uncle Marcus Seidler, which recorded that the Marcus Seidler House still had an intact original heavy divider curtain with a ‘boucle texture’4 that may have been the same fabric used at Rose Seidler House. The hunt was on! A telephone call to Marcus’s son Brian Seidler AM, who lives with his wife, Donna, and family in the Marcus Seidler House, proved fruitful. Brian still had a heavy brown textured curtain that had once hung in his parents’ bedroom. He generously loaned the curtain to MHNSW, providing an invaluable reference as we searched for a similar fabric.

After months of research, procuring different samples and dyeing them in different hues of ‘brown’, with the assistance of soft furnishings specialist Chrissie Jeffrey we selected a fabric with a similar weave and dyed it in a shade as close as possible to the curtain Brian had supplied. We also acquired enough fabric to replace the playroom curtain and the upholstery on the grasshopper chairs, to re-create the original design scheme. This work will be undertaken in the coming year.

The sofa was delivered to Ben Stoner’s workshop for assessment and treatment. We knew that the sofa had been worked on many times previously, and our intention was to minimise intervention by retaining as much of the early evidence as we could, but work to stabilise the object and regain the sleeker, more angular lines reflected in the 1950s photographs.

First, the fabric was carefully peeled back, the castors were removed, and the framework of the sofa was analysed and photographed. Stoner identified that the rough‑sawn timber frame was simply constructed from a variety of species, including Queensland maple and coachwood. Most interestingly, a smaller, more finely finished arm was revealed, set back from the front of the sofa and nestled underneath the final design. No records survive of Seidler’s commission to Kafka, so we don’t know how the arm came to be redesigned. The physical evidence suggests that the modification, which resulted in a higher, wider arm that extends forward to be flush with the squabs, was made before the couch was first upholstered. Aware that this fascinating detail would be hidden again when the sofa was reupholstered, we took extensive photographs of the previously hidden arm.

We looked at the base of the sofa for evidence as to how it originally sat. Three castors and their wooden blocks, thought to be original, were then reattached to the front base. The decision was made to return the castors on the back of the base directly into their original ferrules (or castor collars), without blocks, allowing the sofa to rake back as it did in the early photographs.

The upholstery on the seat base was sound, the springs were still in place and stable, and there was both original and more recent hessian webbing. The squabs contained original foam that had hardened with age encased with later padding. However, the more recent padding on the back was unstable and collapsing. The brief to the upholsterer, David Lewis, was to retain as much of the original webbing and upholstery materials as possible, but to replace the more recent additions, where necessary, so that the sofa regained its more angular form. The sofa was then re-covered using the newly sourced fabric, complete with piped edges.

With the conservation work on the sofa successfully completed, we look forward to welcoming you to Rose Seidler House so that you can see the object placed in the living room, serving as a counterpoint to the other furniture, just as Harry Seidler intended. 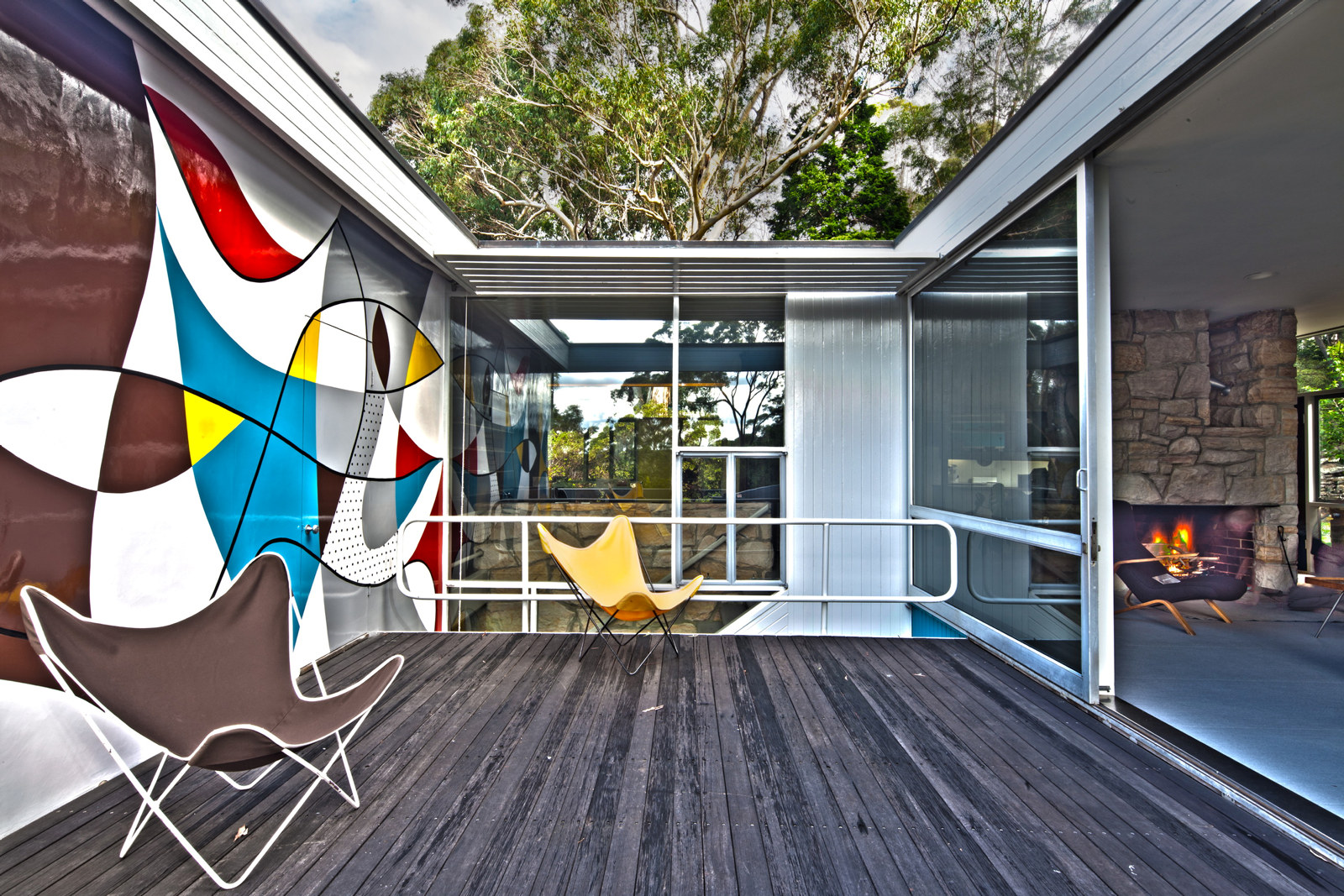 A new way of living

Once word spread about the newly built Rose Seidler House in 1950, it was the ‘most talked about house in Sydney’. Seventy years on, it's impossible to deny the strength and daring of Seidler's vision 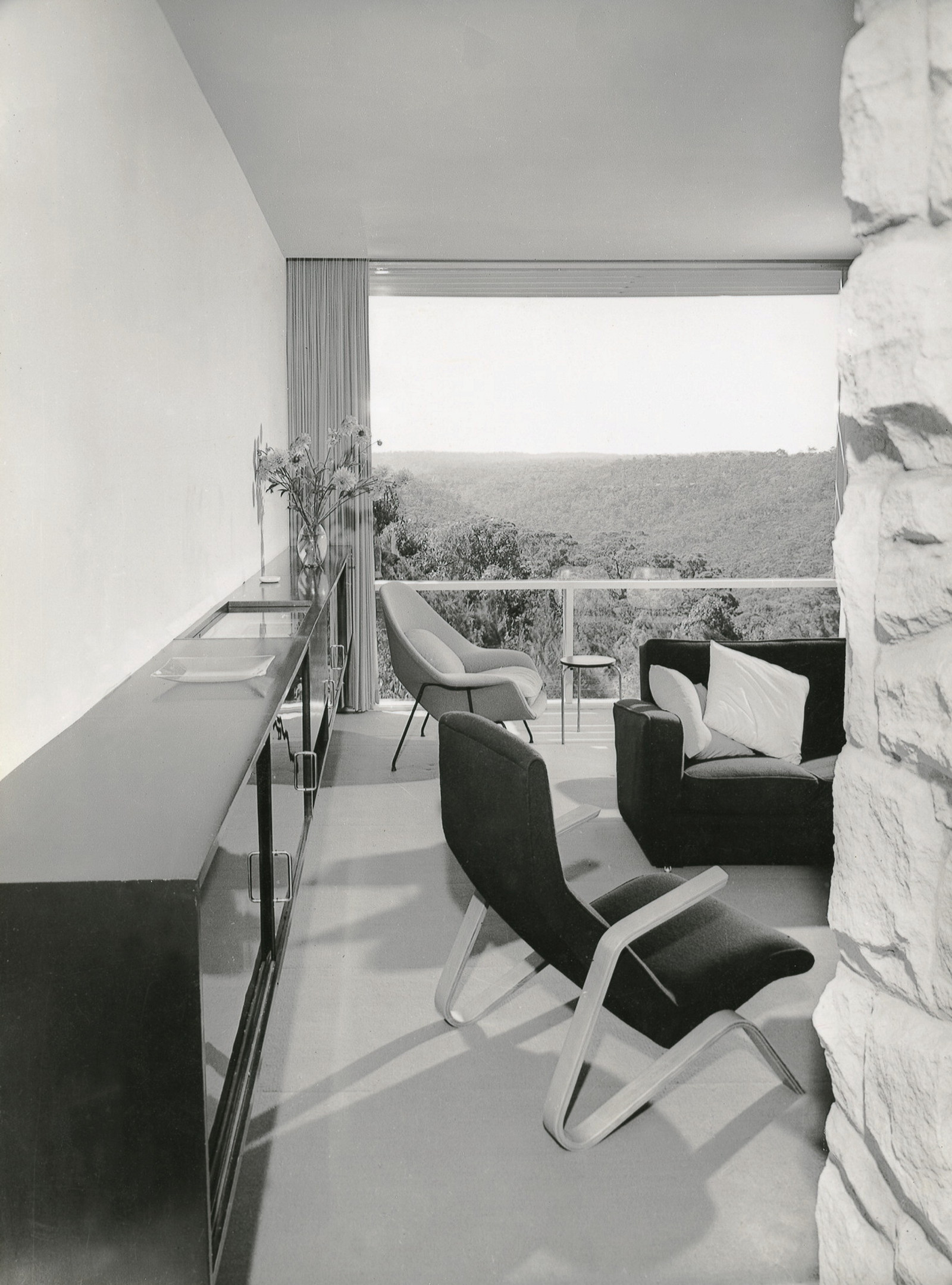 From the curtains to the coffee table and the cutlery, every object and fitting in the house Harry Seidler designed for his parents was of a functional and flexible design that reflected the modern lifestyle 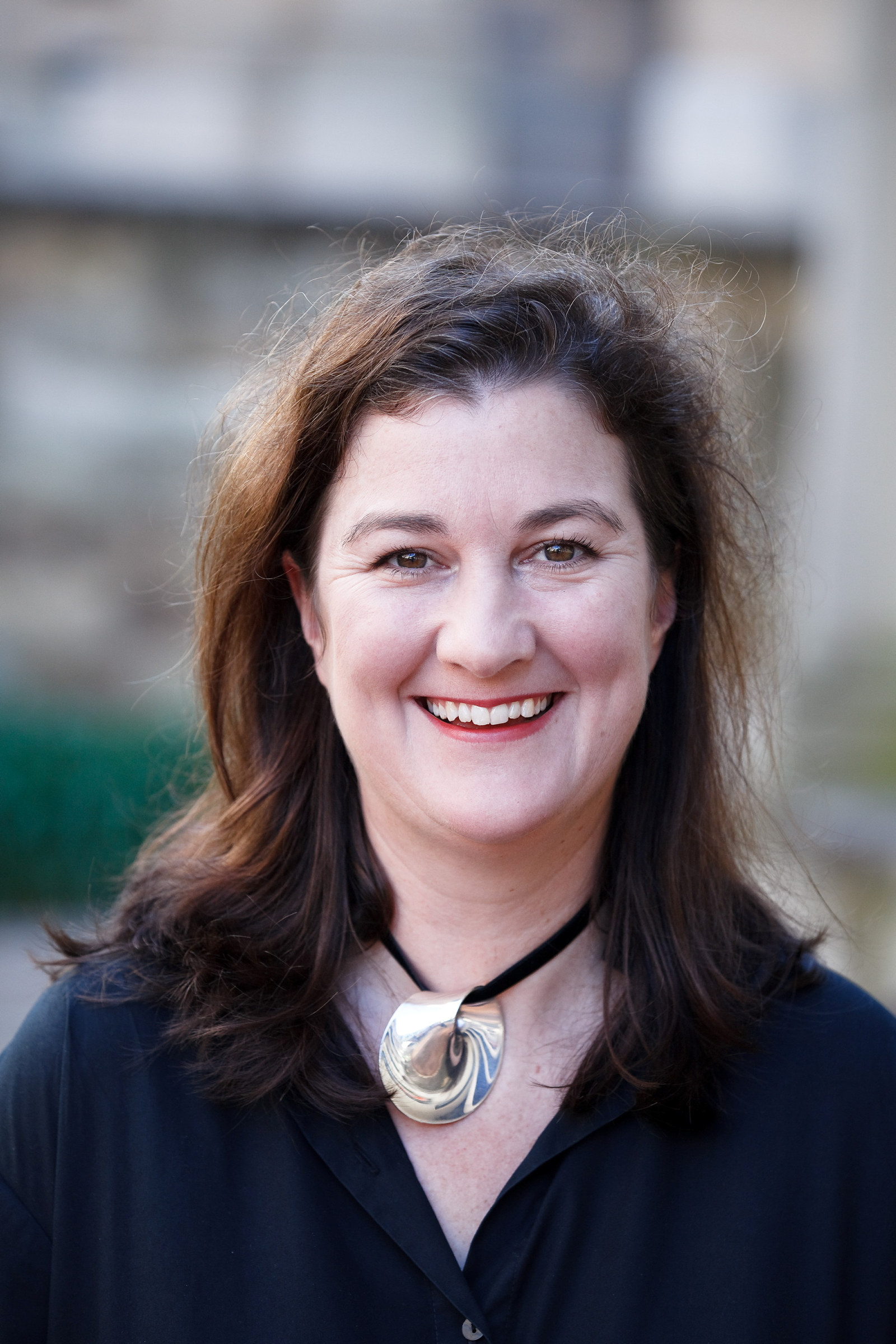